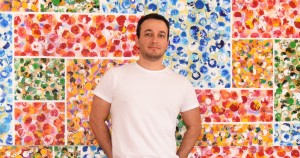 Eyal Radwinowitz, Israeli artist from Tel Aviv, will exhibit for the first time in The Netherlands his abstract work on “ERO circles” and “Contemporary Futurism”. The selection from several series of the artist are all energy driven by either a vibrant use of color or elevated sense of motion. “Just as everyone showers in water to feel refreshed, I welcome people to visually shower in my art and feel energized and rejuvenated“, states Radwinowitz.

The focus on energy is at the heart of Radwinowitz’s artistic research. With stirred imagination, he created the “ERO Circles” series, which comes to express energy and feelings through the archetypical characteristics of colors, and the “Contemporary Futurism” series, which comes to depict energy of motion and speed in today’s ultra-technological, informational world. The selection of his unique abstract paintings is exhibit at “Gallery Alafran” in Diepenheim opens on Sunday October 30, 2016 at 3 PM and the exhibition lasts until ………………

Born in 1979, Eyal Radwinowitz grew up in Tel Aviv and Miami, and is currently based in Tel Aviv. With a unique style characterized by live use of color and elevated sense of motion, Radwinowitz’s artwork has been internationally exhibited, including in Miami, Hong Kong, Singapore, Tel Aviv, and now the Netherlands.

Radwinowitz always routed his life towards artistic creativeness. He initially began as a figurative artist and was largely inspired by master painters like of Botticelli, Dali and Picasso for their adventurous approach to painting, and simultaneously, their harmonious use of color. With time, Radwinowitz became increasingly captivated by abstract art and its boundless freedom, and through the abstract has made his mark.

Radwinowitz has always seen himself as an observer as well as a player in this world: “Human reality and behavior intrigues me – how we feel, how we act, and we react. The driving force to it all is energy – The energy that we receive from the world and the one we generate. As energy is unseen, yet very much sensed, the only way I can depict it is through the abstract. My only tools being the colors and the motion. I recall a visit to the Museum of Modern Art in New York, where a large scale Jackson Pollock painting caught my eyes. That day certainly triggered my evolution from a figurative painter to an abstract one. I was amazed at how a painting which in reality depicts nothing, is in truth so breathtaking and intense in the feeling it arouses. This intensity has stirred my imagination and led me to develop my “ERO Circles” series, which comes to express energy and feelings through the archetypical characteristics of colors, and the “Contemporary Futurism” series, which comes to depict energy of motion and speed in today’s ultra-technological, informational world”.

Using a composition of multiple small circles allows Radwinowitz to create a display which is, both, colorful and harmonious. The paintings are composed of an intense mix of colors and shades, each with a unique energetic significance that together define the energy of the subject painted. Just as energy and the feelings it arouses are unique, so is the mix of colors in each painting.

The series is influenced by the Archetypes Theory of the Swiss psychologist, Carl Jung. According to Jung, archetypes are characters, symbols, and reoccurring states that exist both universally and instinctively in the collective subconscious of all mankind. A proof that all human beings share these archetypes is the similarity that exists between the mythological stories of different cultures. Among the archetypes classified, Jung has also defined colors. For example: White can symbolize positive concepts such as light, purity, and virginity, but can also be associated to negative concepts such as death. Black symbolizes knowledge and wisdom, but also cruelty, death, mystery and sadness. Blue expresses calmness, truth, and security, but also melancholy. Red radiates passion but is also associated to violence. Green symbolizes life, re-birth, growth, hope, and fertility. Brown symbolizes Man’s connection to the earth.

The visual presentation is reminiscent of viewing cells through a microscope. In so, the artist creates a visual metaphor of a journey into the internal essence of the subject painted. The series is named after the artist’s nickname – ERO.

Radwinowitz achieves a sense of motion by painting scenes with long strokes across straight lines – whether horizontal, vertical, diagonal, perpendicular or overlapping in a free and unexpected manner. It presents his perception of the rapid pace of life which characterizes modern times. Radwinowitz named the series “Contemporary Futurism” expressing a futuristic homage to the Italian Futurist movement of the early 20th century.

The Futurists glorified technology and automation: “External speed has enhanced our spiritual activity and so has changed our perception of time and space. As a result we have achieved a sense of continuity and simultaneousness of things and events, a simultaneousness of vision and sense.” By minimizing the scale of colors to a black and white monochrome it stresses the monotony, melancholy, and alienation of the modern social state. This in contrast to other paintings which are illuminated with a myriad of colors celebrating the “positive” side of the period expressed by mass social gatherings and festivals.

Katharina Lichtenscheidt geboren in 1963 in Wuppertal.

no images were found

no images were found 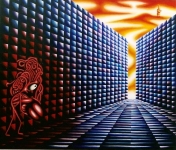 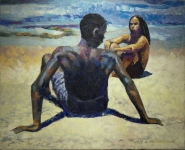 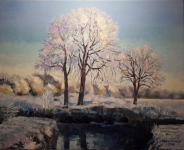 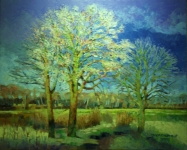